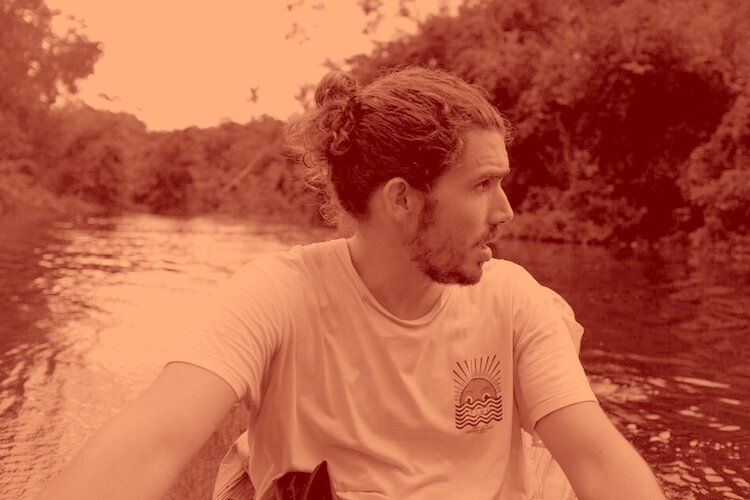 Francesc Del Maral
July 24, 2020
Xapiri Voices aims to give a voice to those people who want to convey a message about their situation, their work, their wisdom or any topic that can enrich our community, creating a bridge between our listeners and our allies in the jungle.

XapiriVoices is a new concept of conversations broadcasted through our Instagram Live as a result of our photographic campaign PhotosxAction, which was carried out during the month of June to raise funds for the Shipibo-Konibo in the emergency situation of Covid-19.

On this occasion, two interviews were conducted among two natives of the Shipibo community from different backgrounds: David Diaz Gonzales, a photographer from Pucallpa who also participated in PhotoxAction, and Gabriel Senencina, a native of the Amazon forest living in Cantagallo in Lima.

In this post, we would like to share some of the most outstanding comments and reflections from the two conversations, which were led by Tui Anandi and Florence Goupil, also participants in PhotosxAction.

David Diaz Gonzales; Shipibo-Konibo photographer and participant in PhotosxAction, shared with us his work and career as a photographer in the jungle, and the situation given by the Covid-19 in the region of Ucayali. Interviewed by Tui Anandi from Brazil, a photographer focused on the Amazon culture, they both had a very inspiring conversation that you can see here (in Spanish).

David initially started studying law because of his interest in politics, but ended up distancing from it and focusing on his true passion, photography. He began to photograph with an analogue camera lent to him by a relative, and with the money earned from some production jobs he was able to buy his own camera and start his self-taught photographic career ‘I was always searching on the internet for youtube tutorials, [...] youtube professor, because after all there is no money to enroll in a school and dedicate oneself to that, very few can afford it. [...]’. The limitations to develop a professional career as a photographer due to the limited availability in the jungle and the economic limitations were not an impediment for David to develop his talent, but he is aware that in general the art scene in Peru is very centralized and not accessible for everyone.

Despite what may seem to be limitations and disadvantages, David knew how to take advantage of it and create with the resources he had at his disposal, doing photo sessions at home with his relatives, using natural light whenever it was available, and creating compositions that are worthy of admiration.

The fact of being part of an indigenous community, made his photography have a closer and more real perspective towards his people, creating unique photographs that have a very familiar and connected feeling with his culture. 'I decided to give it more weight when I realized that I could transmit my culture through photography. [...] I used it as a display tool so that others could get to know my culture.'

‍With this, he explains how photography helped him to understand more deeply his culture and to break with the stereotypes given from outside.

"[...] I want to transmit a more intimate, more humane perspective that can break down stereotypes and that can humanize the Shipibo community and its people’. As Tui also commented, ‘Producing the work from within. Not just a stereotypical view from the outside."

In addition to his photographic career and his admiration for his culture, knowing more and growing professionally, David talked to us about the situation given by the COVID-19 in his region, how this new virus began to spread from the beginning of April in his city and the fear that it generated, since his family and himself lived it closely having the virus in their own home.

In the jungle, a pandemic such as the one we are all experiencing over the world, is further complicated by their cultural lifestyle, for instance, living as a family in shared spaces without divisions or walls. Or the lack of medical care and basic resources due to the inaccessibility of their location. Another problem is the income of money for the family, since in many cases they live what they earn on a daily basis 'Either I go out to work and get sick or I stay home and starve [...] they're surviving.'

In spite of this, the conversation between David and Tui was truly very positive and inspiring, which is definitely necessary in these times. Both of them soon want to return to the jungle to continue photographing whenever it is safe for everyone.‍

Gabriel Senencina, Shipibo-Konibo and native of the Amazon forest, spoke to us from the roots of his culture facing today's world, and in the context of the pandemic and other social difficulties, he explains how the Shipibo-Konibo look forward. Interviewed by Florence Goupil, currently an explorer for National Geographic, they talk intimately beyond the Shipibo-Konibo culture, which you can see here (in Spanish).

Gabriel begins by describing his experience in Cantagallo, a Shipibo community in Lima that is located in the suburbs of the big city, which has very poor sanitation conditions and during the lockdown was completely isolated with very few resources, even with the lack of drinking water, drainage, and of course with hardly any medical attention.

"It was very difficult to confront this situation [...] we were only able to face it because we had the knowledge thanks to the wisdom of our people [...] We realized that we had to look at it differently in order to confront it and seek the alternative solution to save lives as well, using our own resources."

The importance of medicinal plants in the jungle was mirrored in a situation such as an unknown virus, which as he tells us, is not the first time something like this has happened among his people since colonialism. In this case, by being far from the Amazon, they used what they had on hand. 'In the Amazon we have many plants, but outside we had to use what was available at hand. We used eucalyptus leaves, lemons, garlic, onions, 'chancaca'... [...] We were looking for mucus leaves... [...] We were constantly trying to warm up and balance the body, and to avoid coagulating the blood.'

After contextualizing the situation for the Shipibo-Konibo people who are located in big cities such as Lima, Florence and Gabriel talked more about the culture, sacred places, art and other important elements that conform the Shipibo-Konibo nation.

One of the highlights was his description of the nature of "Ronin", following the visit that Florence had already made on several occasions to the Cumancaya lake, in which she was surprised by the energy and beauty of that place, the same place where she had photographed Gabriel.

"The Shipibo-Konibo since ancient times relate to the water beings, the beings of the earth, the invisible beings that protect the fish... therefore Ronin is a being that protects the living beings of the water... and also has a relationship with us [...] They are protectors."

‍The deep connection that the indigenous peoples have with nature is impossible to deny, as Gabriel tells us: 'To be able to engage with them, to have an encounter, you have to prepare yourself, you have to be aware of yourself and have the relationships with the plants and more respect for them, and have the discipline to obey the universal rules and norms.'

This lead to the explanation of Kené, a drawing, a stroke, art... something that from the outside we do not know exactly what it is, but as Gabriel tells us from his Shipibo perspective, one must also prepare to have an encounter and relate to the plants in order to understand the ancestral wisdom 'It's not just a stroke, the stroke has a deep content, a message. It is a knowledge, invisible wisdom, that is already given, the millenary wisdom [...] It is not to be looked at only as art, it is much more than the artistic look, the tracing path. They are networks of transmissions. It is not only what it transmits, but also the practice, we had to prepare ourselves to be able to materialize what one thinks'.

Another interesting detail was the emphasis on the practice of kené as something that both women and men develop, a fact that many outsiders question. ‘Kené has to be learned by both man and woman, for their houses, their appliances, their canoes... Men had to prepare themselves to be able to confront their future, to be able to keep the couple in balance, it was a reciprocity.'

It was an incredibly interesting conversation concerning topics that, as Gabriel says, one could spend days talking about in order to gain a deeper understanding of their culture and wisdom.

After these two enriching conversations, we are eager to do more in the future, as we believe it’s a way to inspire our viewers and deepen everyone's knowledge regarding these situations that can only be explained from the ground.

We want to thank Florence and Tui for their time in interviewing and David and Gabriel for sharing their thoughts and experiences with the world. We’d also like to thank Alianza Arkana, our on the ground allies in Pucallpa who are doing the hard work of supplying aid to the Shipibo-Konibo people affected by the situation with the money raised through PhotosXAction.

Learn more about Alianza Arkana’s emergency fund and further updates through their website.