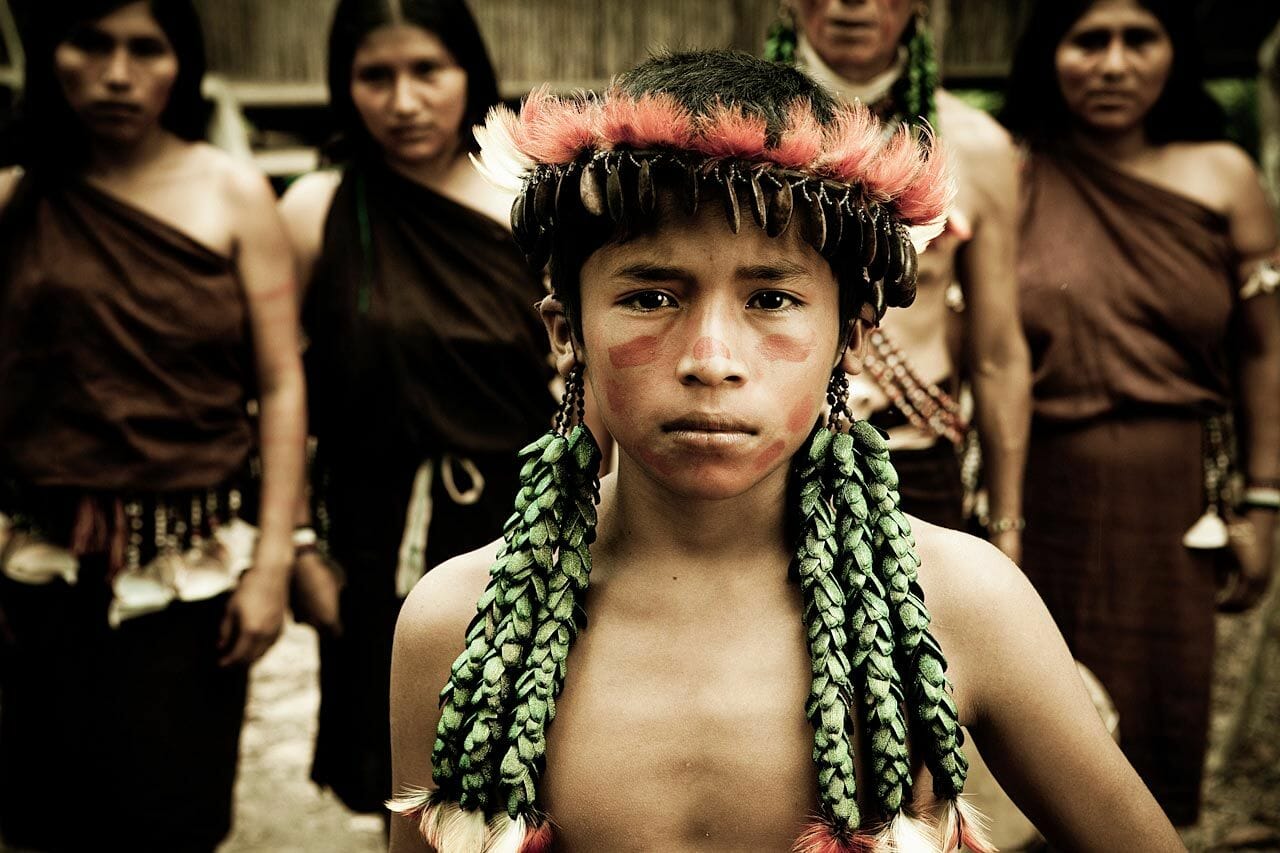 The Awajún, also known as Aguaruna, are an indigenous people located in the northern part of the Peruvian Amazon. They live primarily along the Marañón River and some tributaries near the border of Ecuador. The Awajún are one of the most numerous in peoples of the Peruvian Amazon. Data obtained by the Ministry of Culture states that in 2017 37,693 people identified themselves as Awajún based on customs and traditions. Their language is part of the Jíbaro linguistic family and has been considered a vital language by the Ministry of Education.

The United Nations Organization for Education, Science and Culture UNESCO, declared an Intangible Cultural Heritage of Humanity to the values, knowledge and practices of the Awajún people as it pertains to their ancestral ceramic art form that continues to be transmitted to each generation.

Historically, during pre-Incan times, they were in contact with the Moche.  During the reign of the Incan empire, they were in contact with the governments of Tupac Yupanqui and Huayna Cápac, but with lots of clashes. With the Jesuits and the Spaniards who arrived later, there were also clashes. Consistently resisting the Jesuits, they eventually abandoned their missionaries in the 1700s. Years later in the 1920s, the Peruvian state launched oil exploration in the area, but it was halted and relaunched In the 1960s and 1970s.

Traditionally, they practice slash-and-burn agriculture where the women play a leading role and are responsible for the farm and harvesting cassava. Whereas for men, hunting is the main activity as well as manufacturing weapons, traps, and treatment of animal skins. 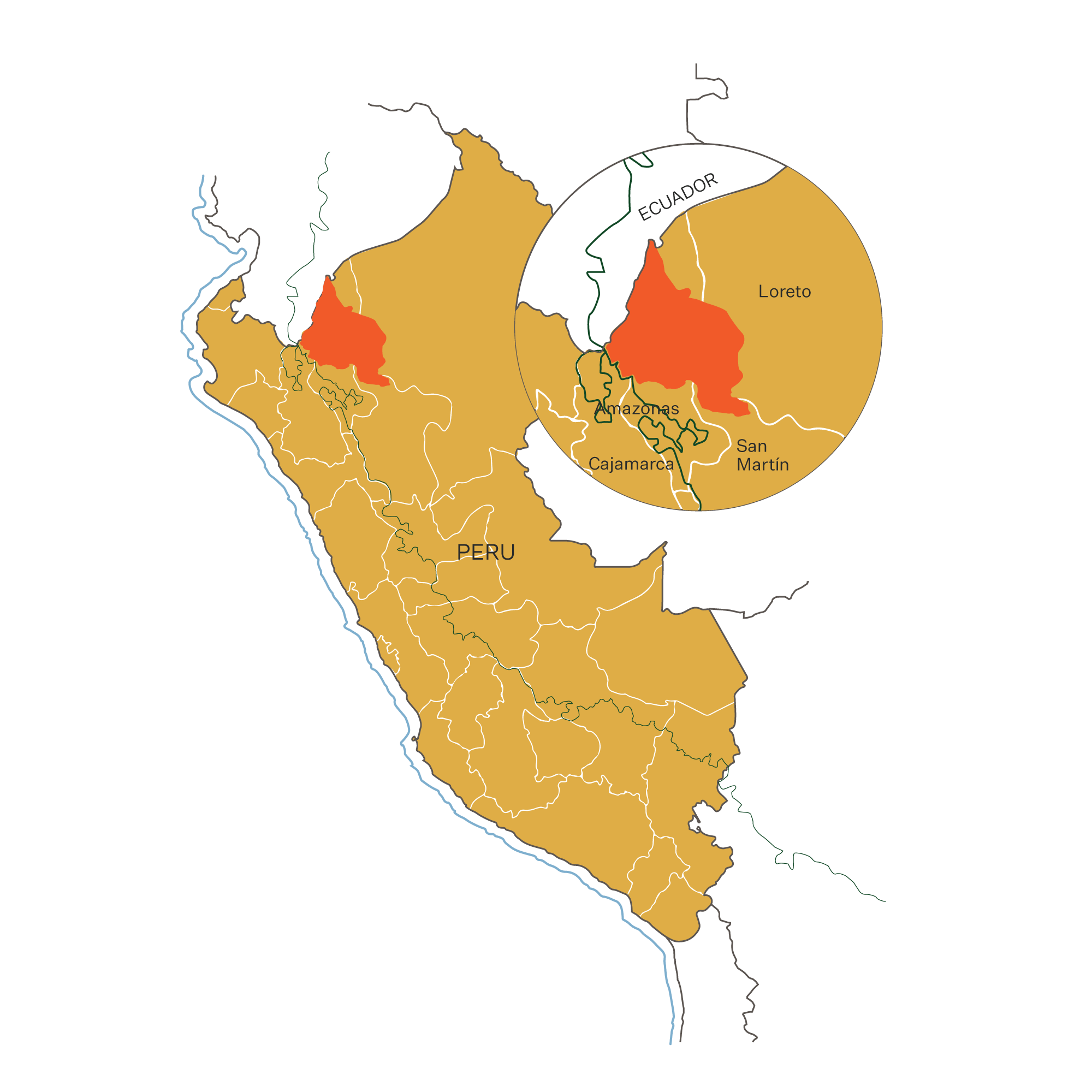 Since 2018, we’ve worked closely with YAPIT Cultura Awajún, an organization that was created in 2013 with the objective to examine and protect the ancestral art of the Awajún. The group works with 100 traditional Awajún artists, the majority being women.

The Awajún traditionally express their art through ceramics, basketry, and bio-jewelry, all of which are made of natural materials like seeds, fruits, leaves, clay, and snails.

In the Awajún universe, producing art is the product of a dynamic relationship between knowledge, ritual, and mythical narration. In their worldview, there are three powerful beings: Nugkui (spirit of the earth), Etsa (spirit of the forest) and Tsuqki (spirit of the water). 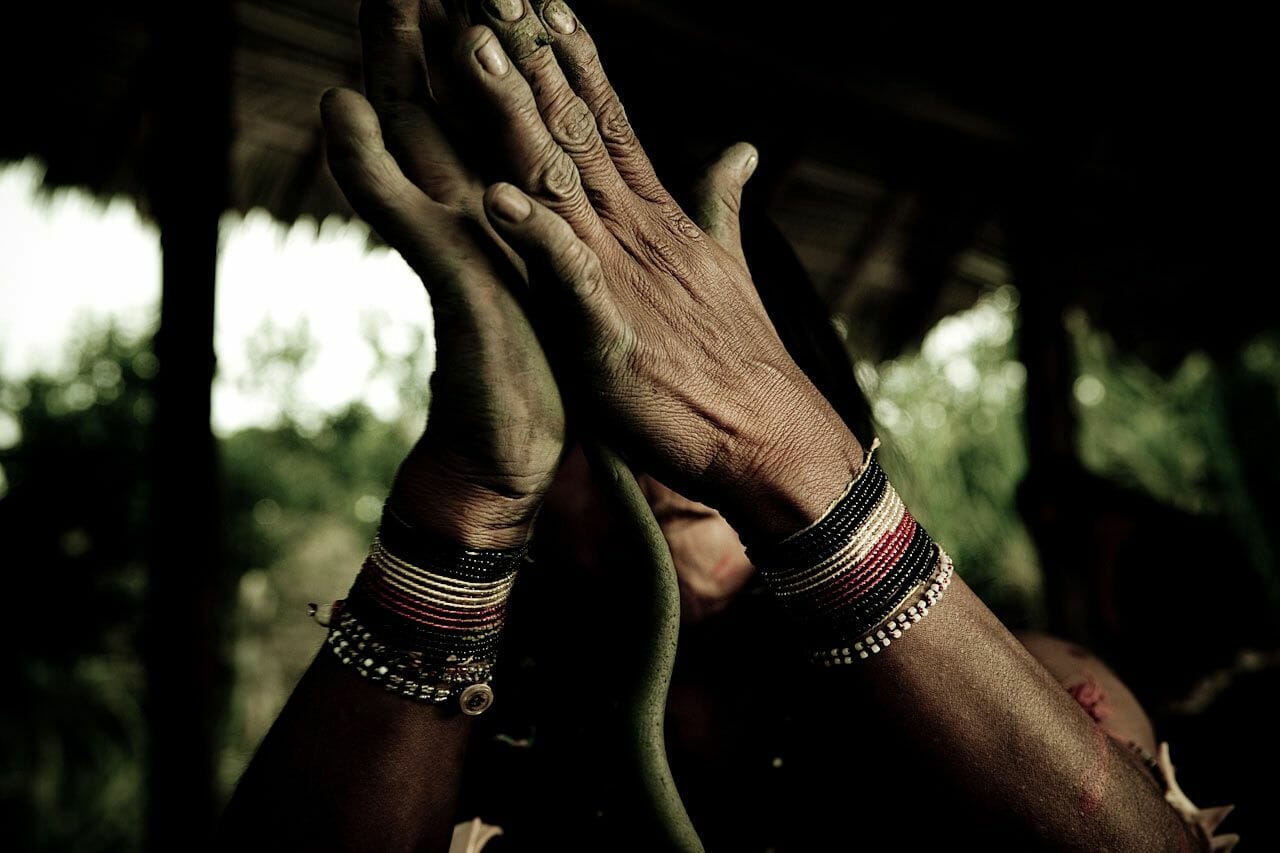 In the Awajún universe, producing pottery is the product of a dynamic relationship between knowledge, ritual, and mythical narration. The learning of such an art is part of the dékamu or ancestral knowledge of the Awajún women, a knowledge that allows them the ability to transform the rainforest elements with their own hands. For this, the women have extensive knowledge of the elements available to them in the jungle and comply with certain restrictions for extracting materials. Central to this process is the Awajún relationship with Nugkui (Mother of the Earth), who taught the Awajún women to live in harmony with nature, knowledge to sow, and to care for plants and seeds.

The chachamamu or designs painted on the ceramics normally have some type of geometric pattern that reflect elements found in nature such as attributes of animals, plants, fish, and leaves. These patterns can also be seen and manifested into a design during the use of medicinal plants.

The materials used in the fabrication of Awajún ceramics are various types of river clay or duwé, tree barks, tree ashes, leaves, natural latex, tree resins, plant fruits and seeds. In combination, all these elements help to fortify the clay and reduce porosity while creating vibrant colors and a natural sheen. For this reason, Awajún ceramics are both decorative and safe for using with food and beverage. 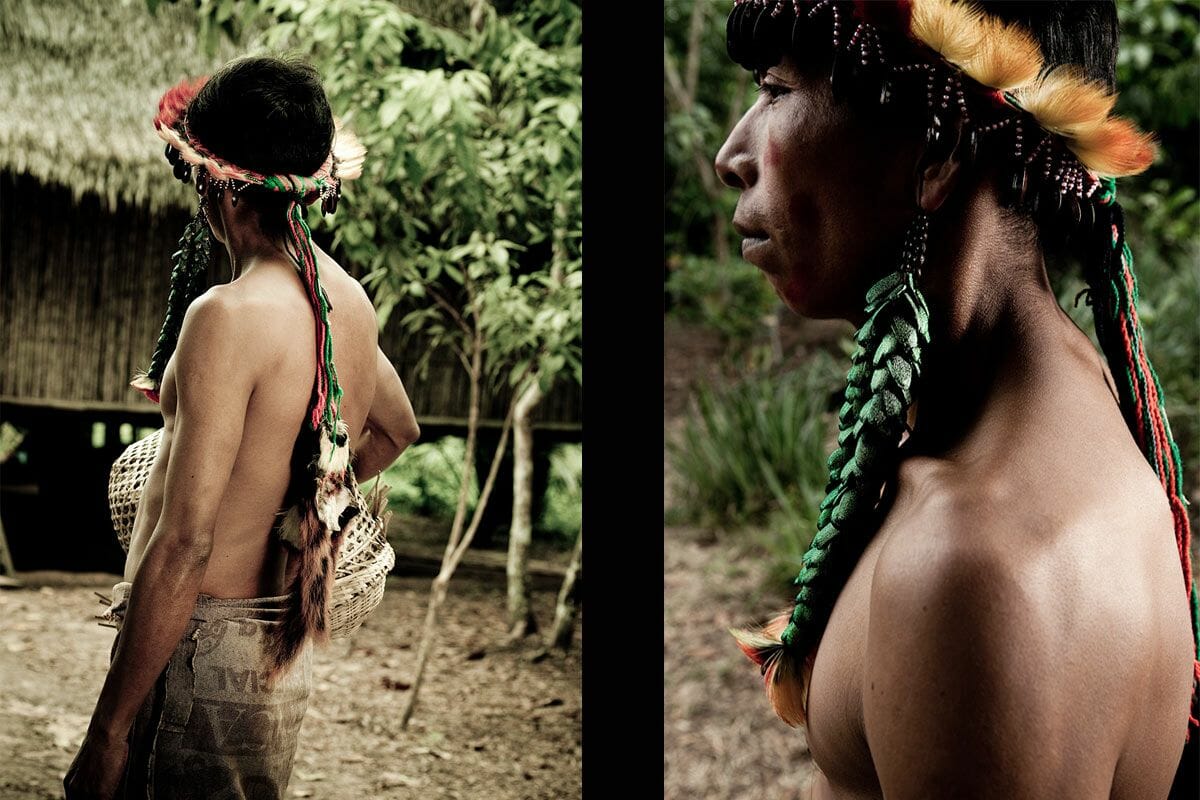 The unique handcrafted pieces of Awajún jewelry are made of different types of seeds such as kumpia, wayampai, chichao, huayruru, and tuju, and are gathered by Awajún women. The different size seeds accommodate the different patterns being replicated in the jewelry, some more intricate than others.  The majority of these pieces are necklaces or bracelets. 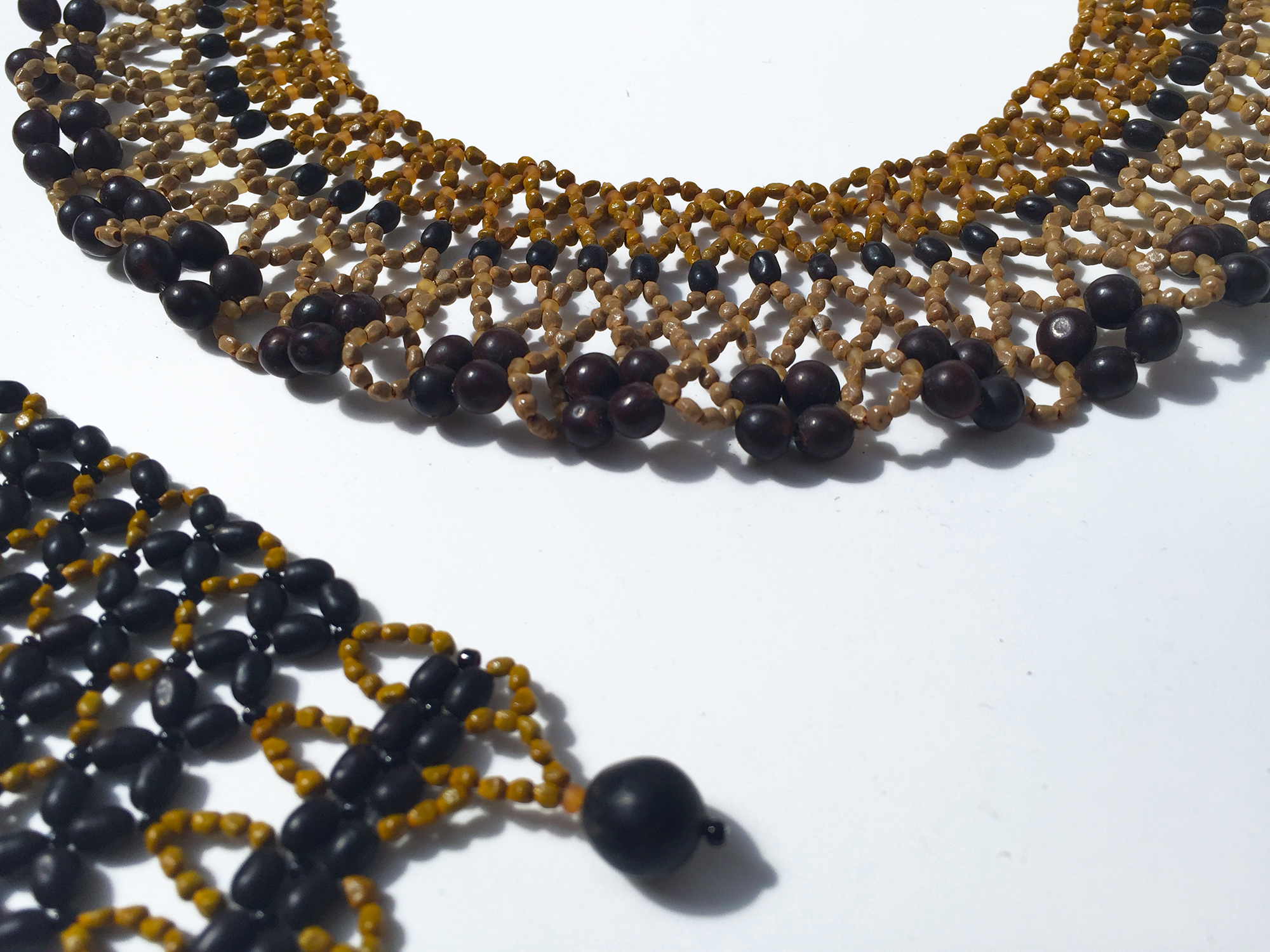 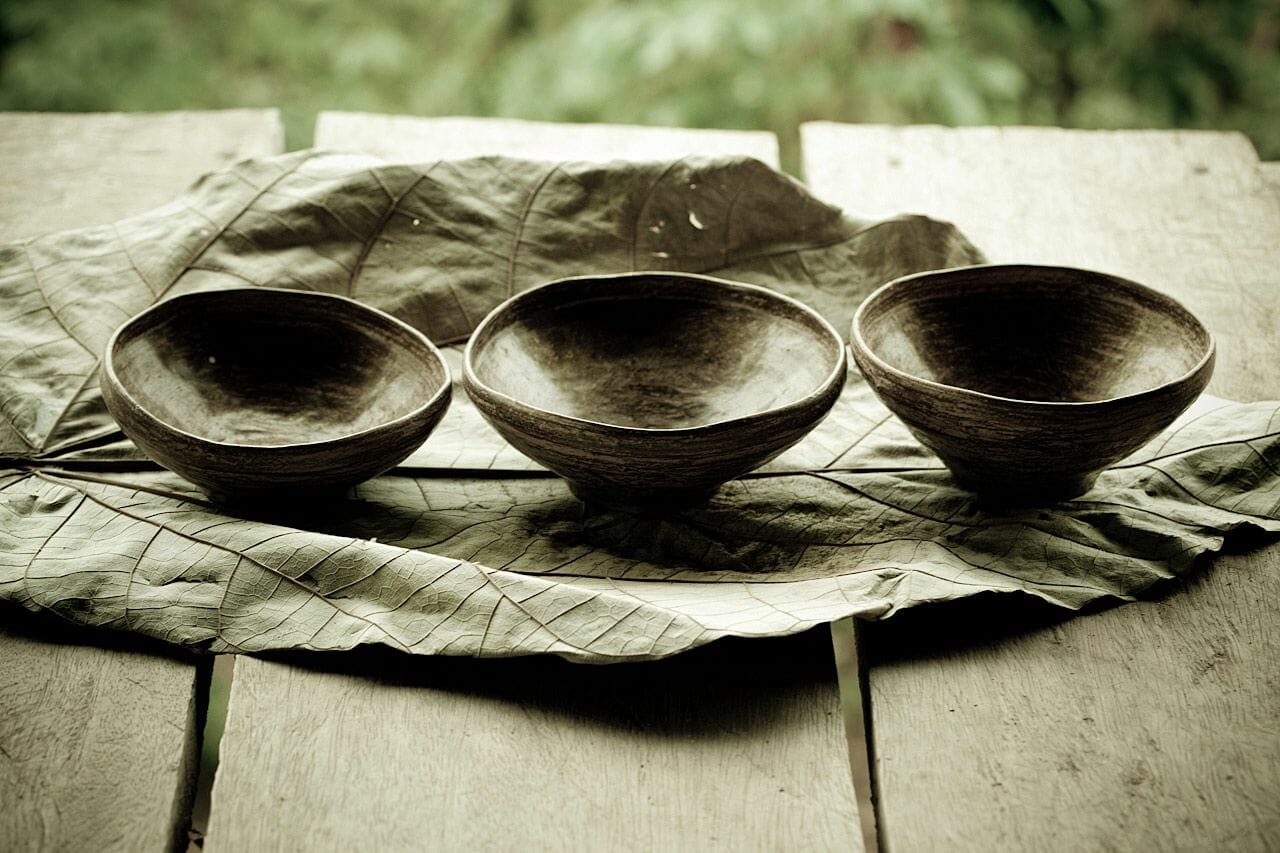 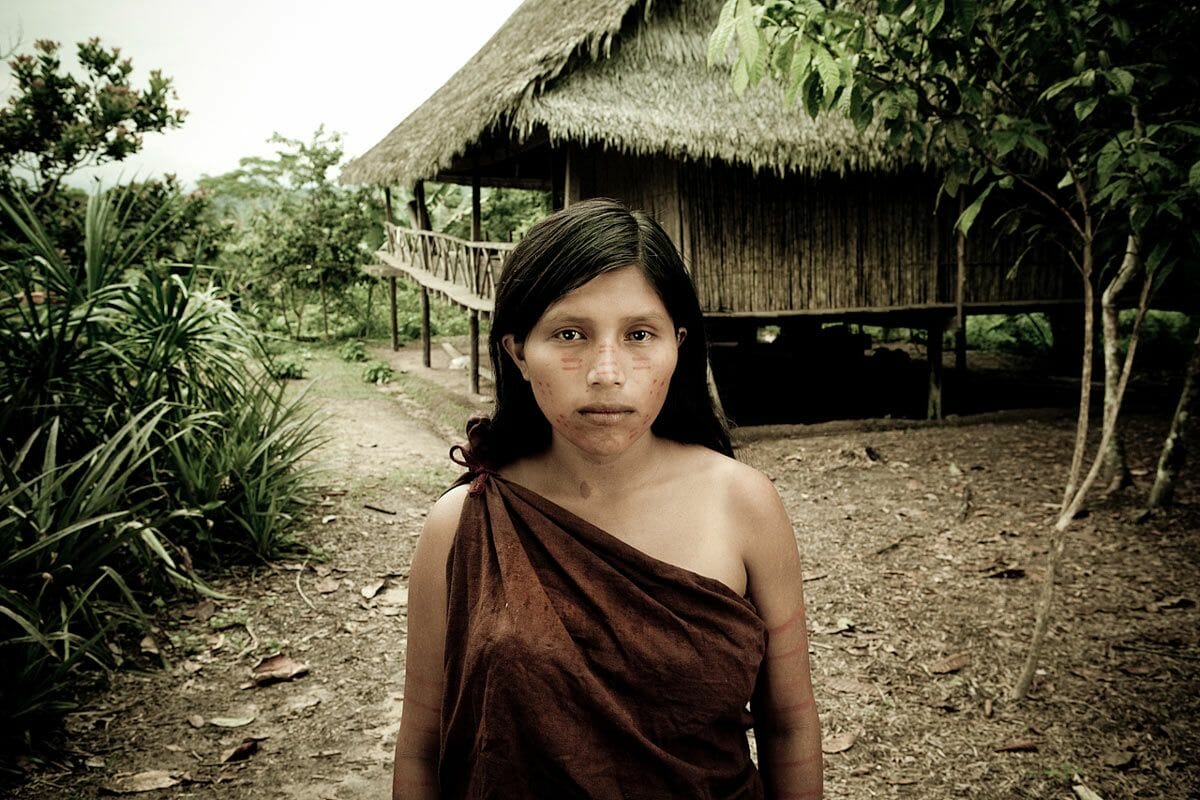 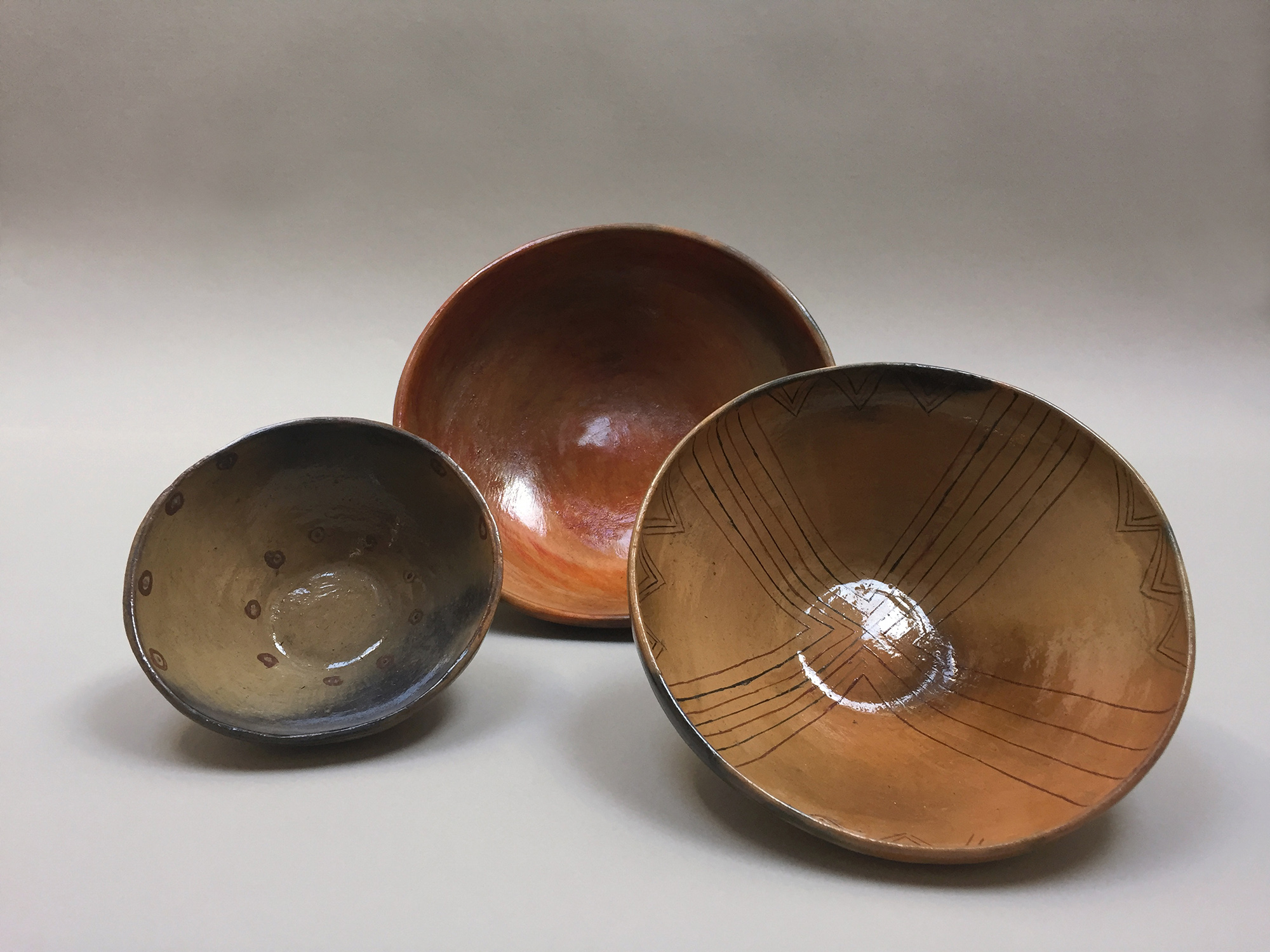 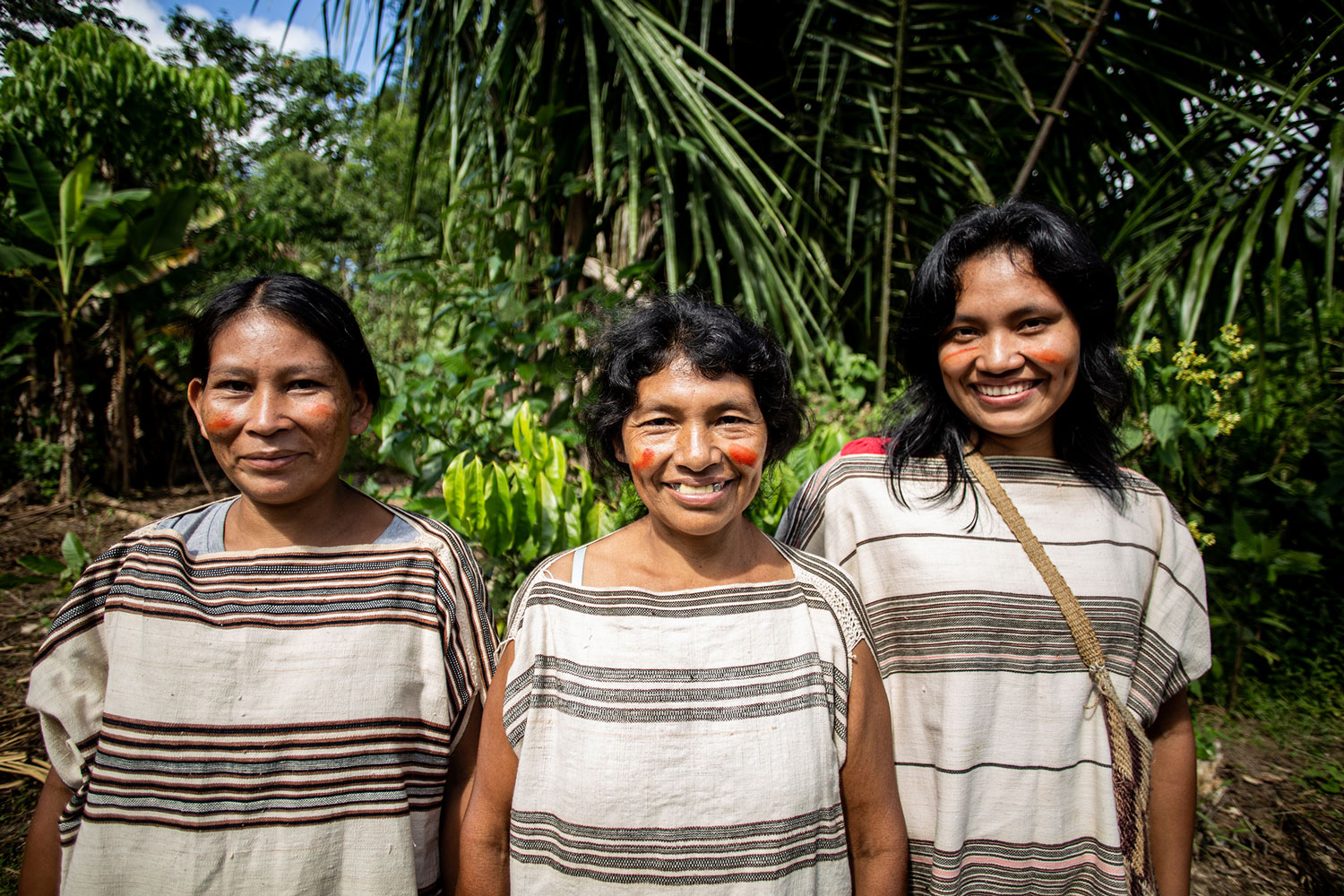 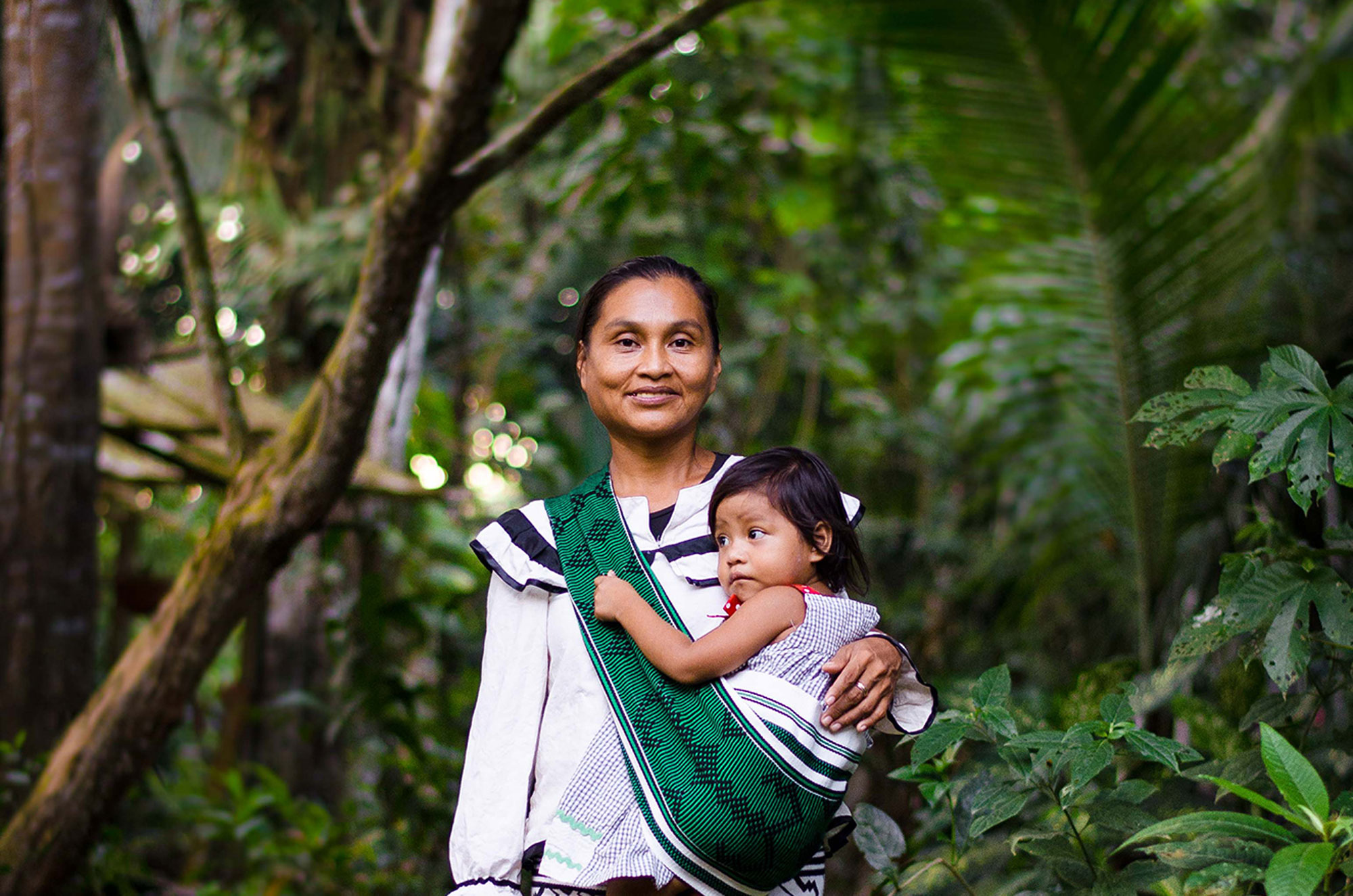 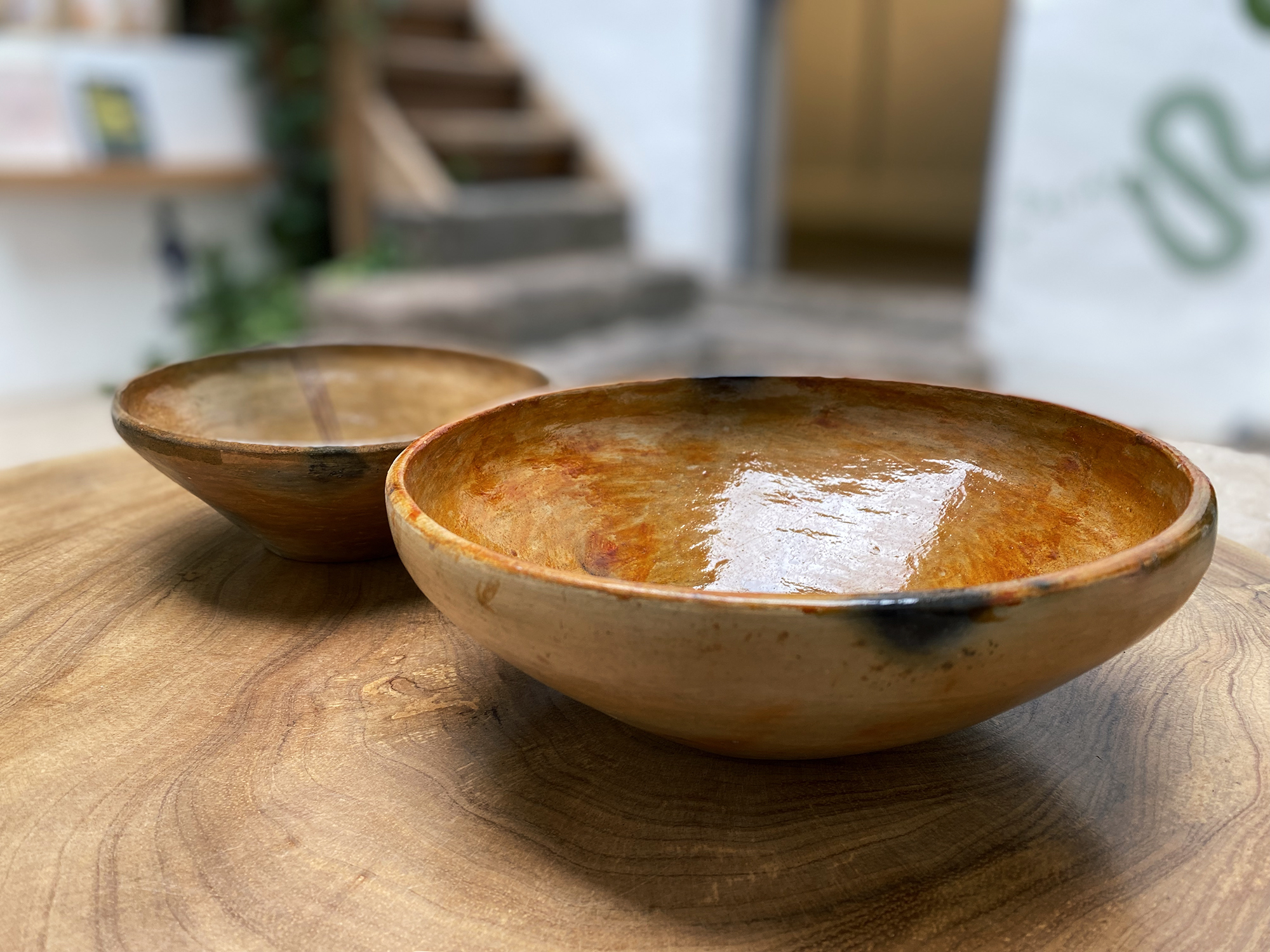 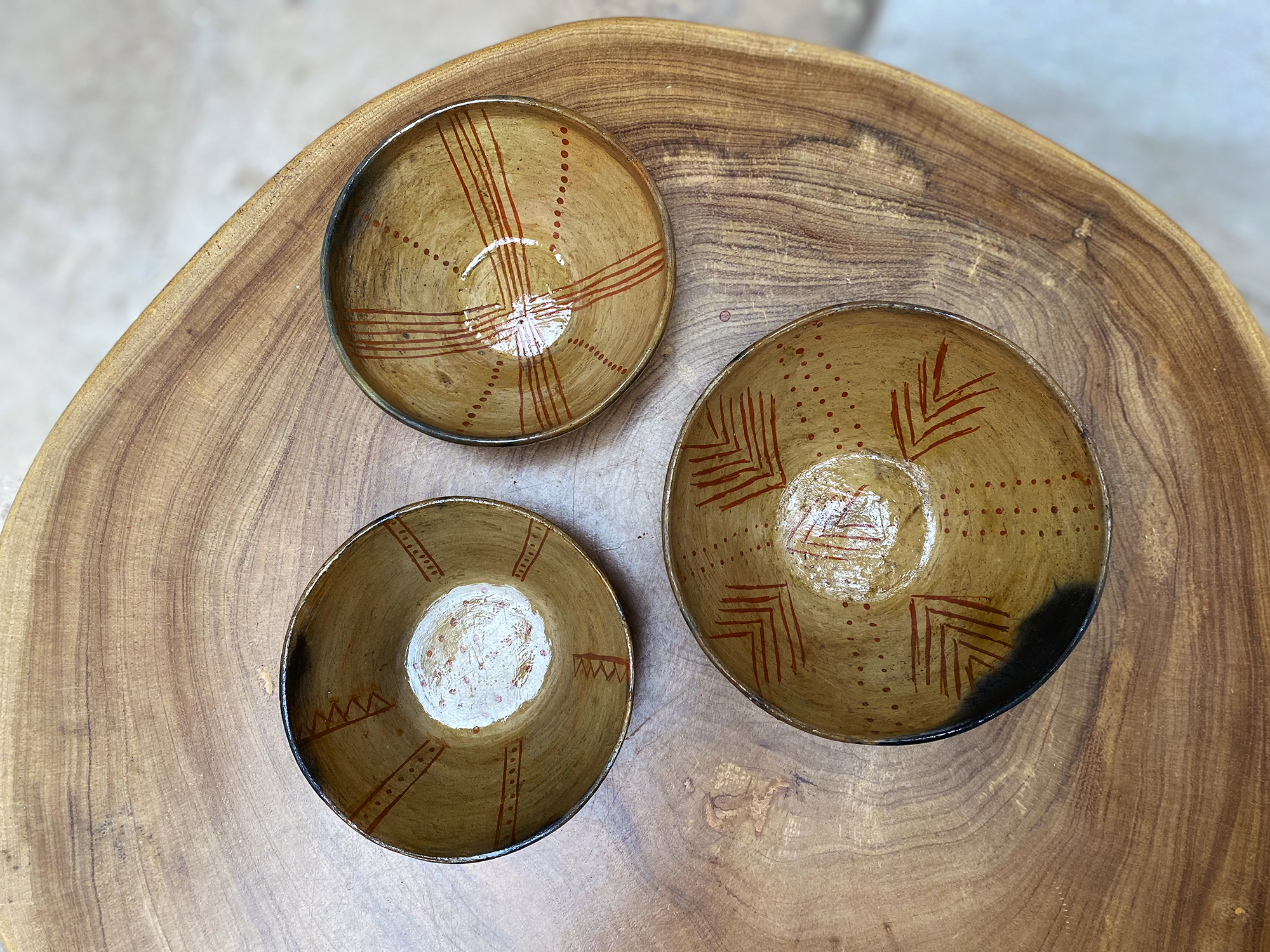 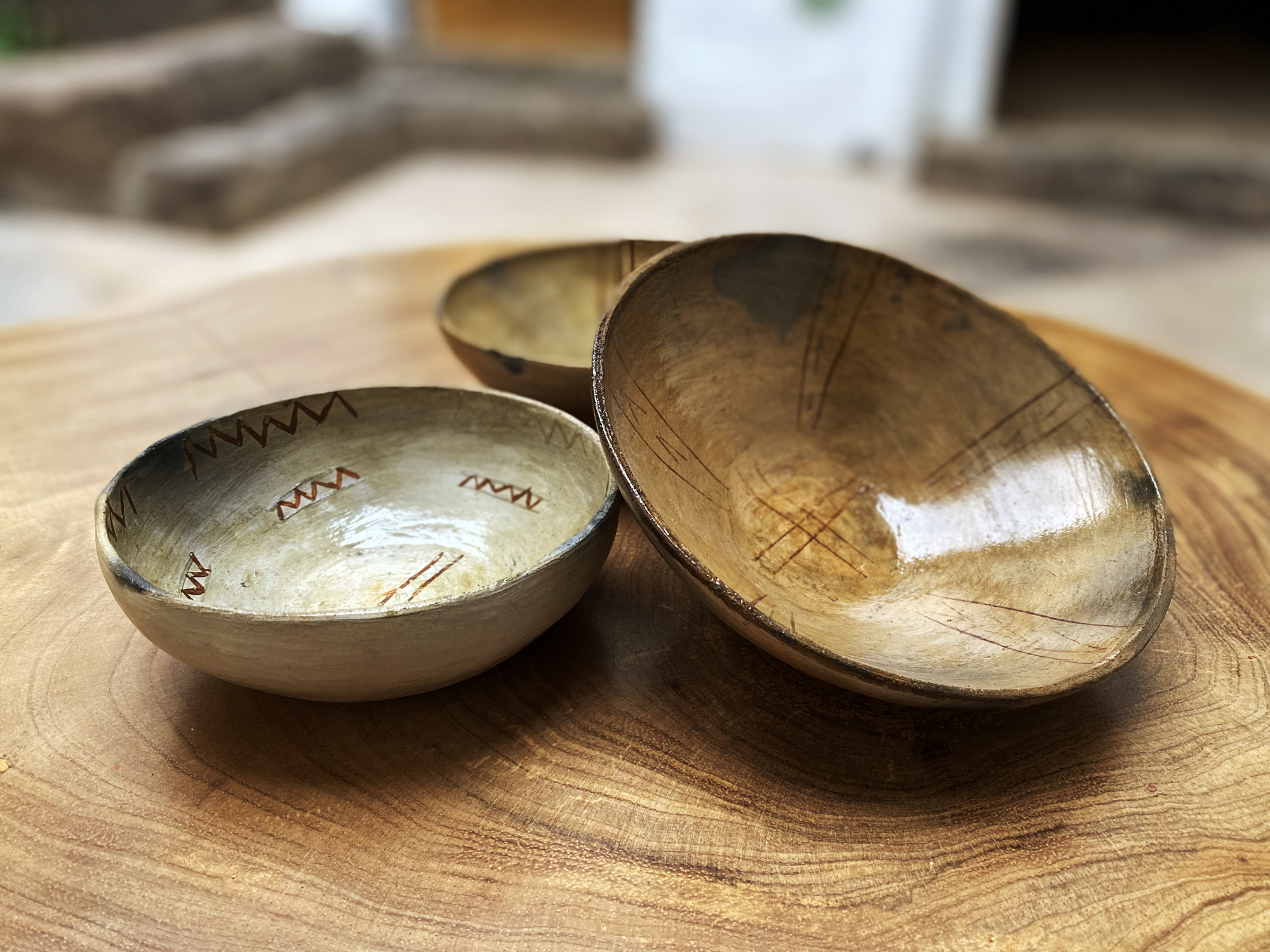 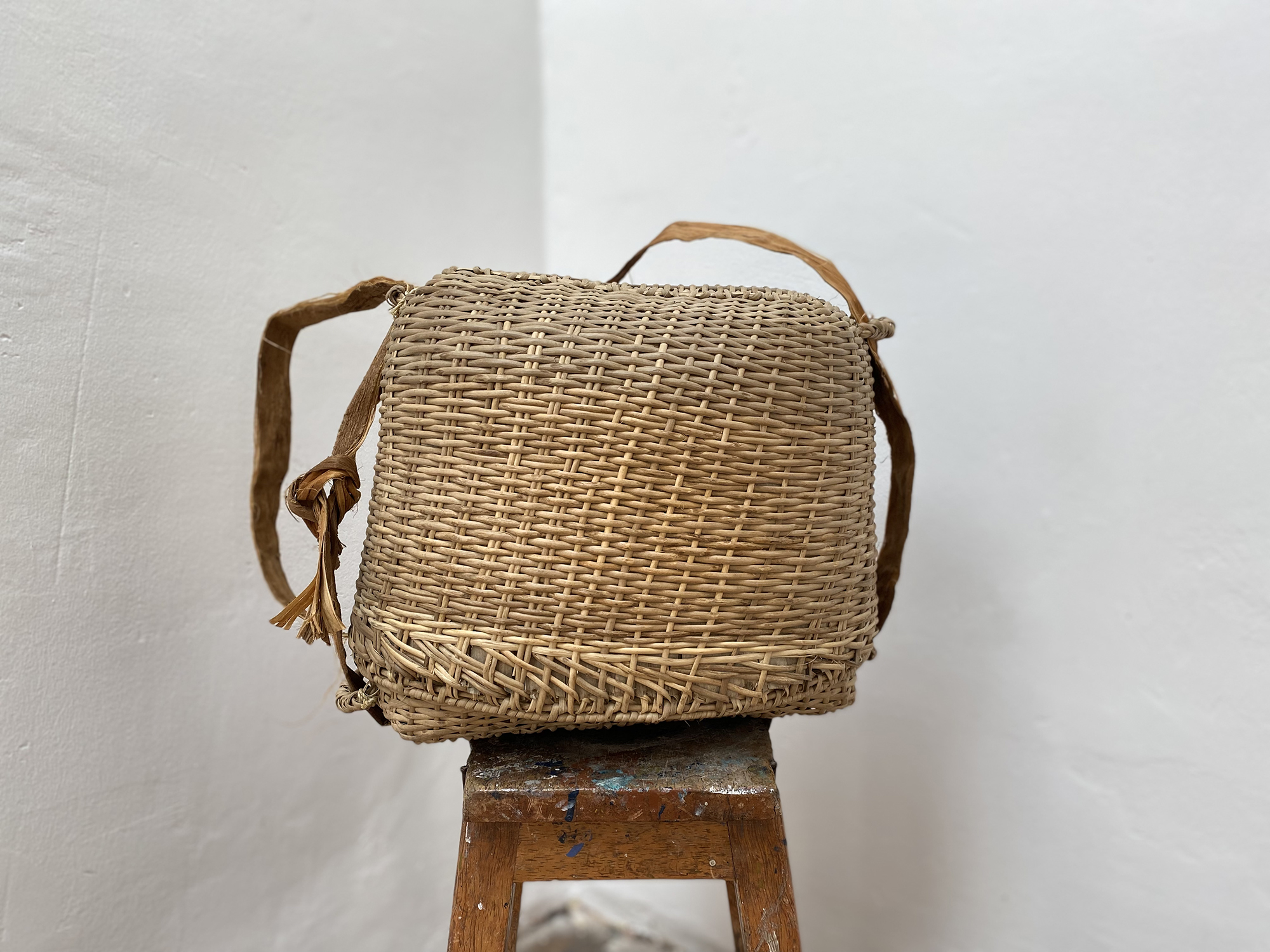 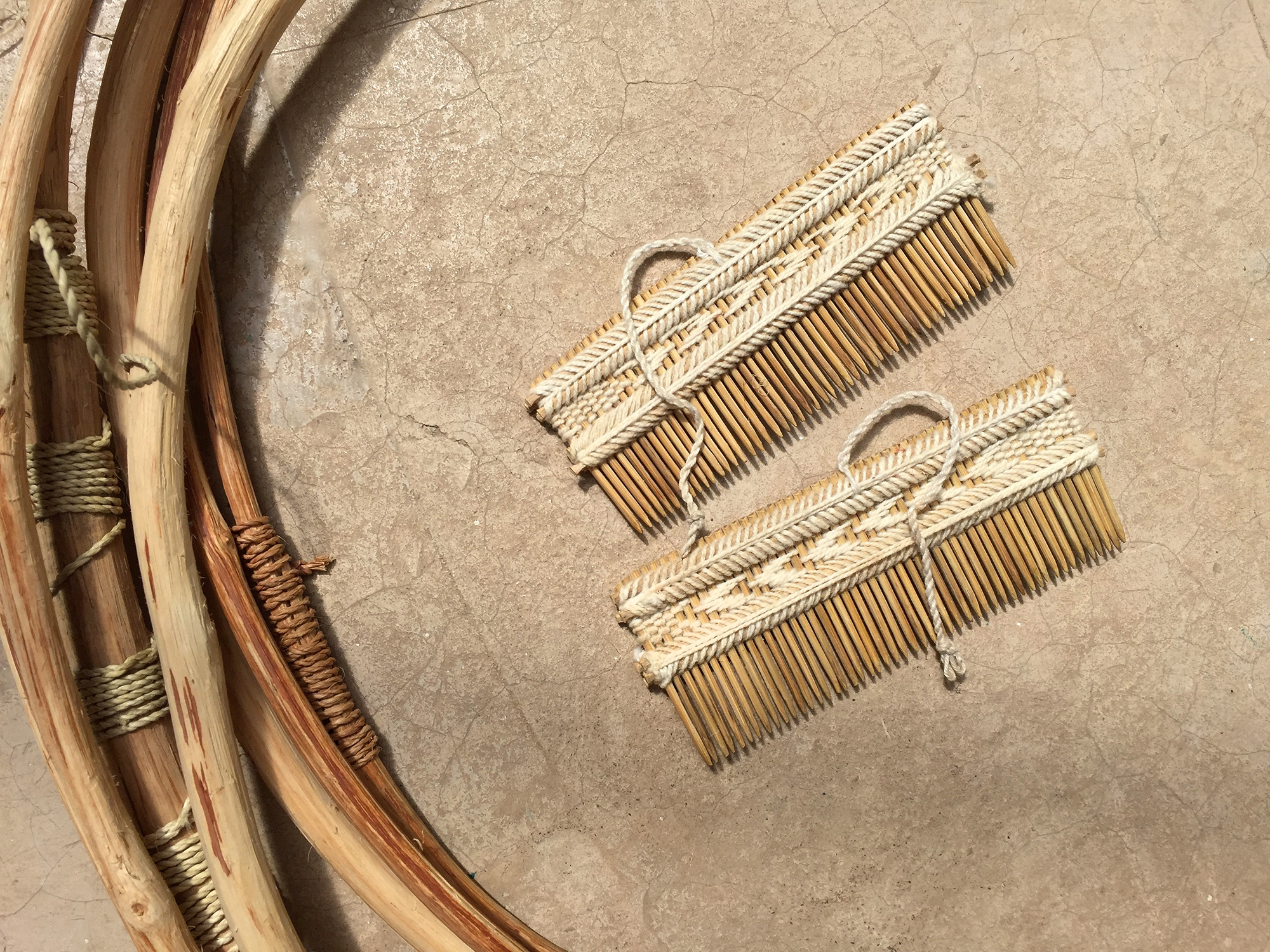 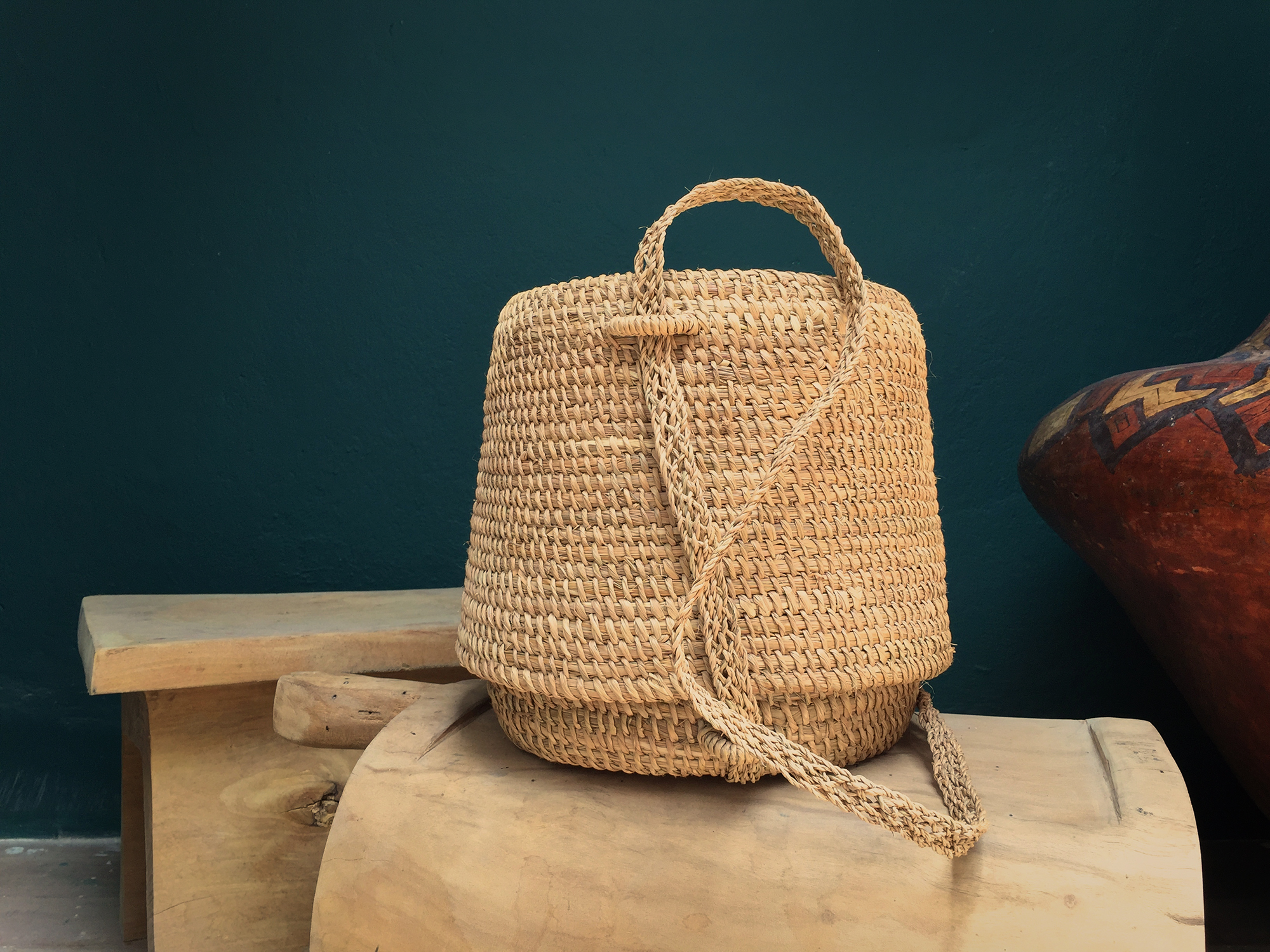 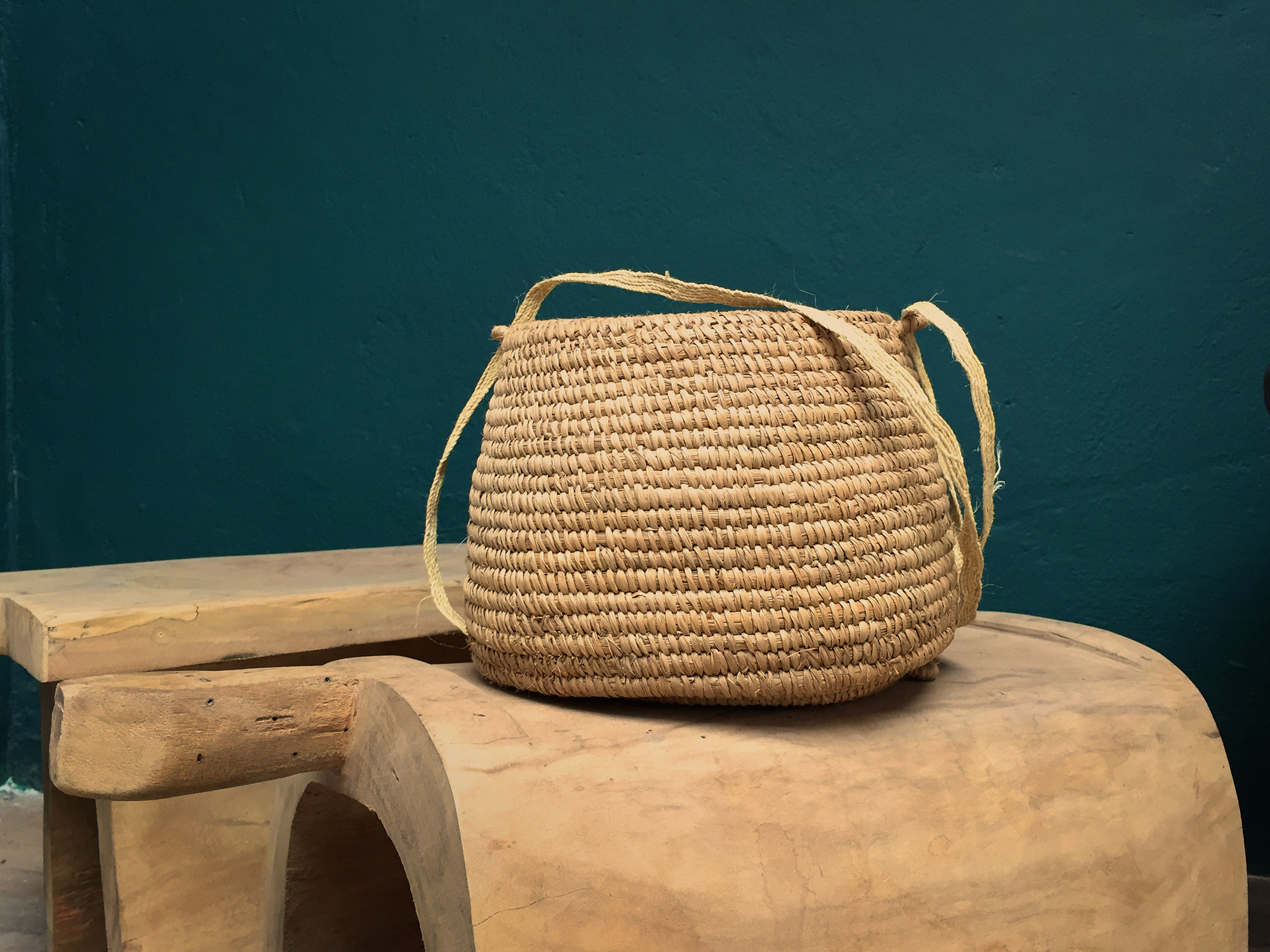 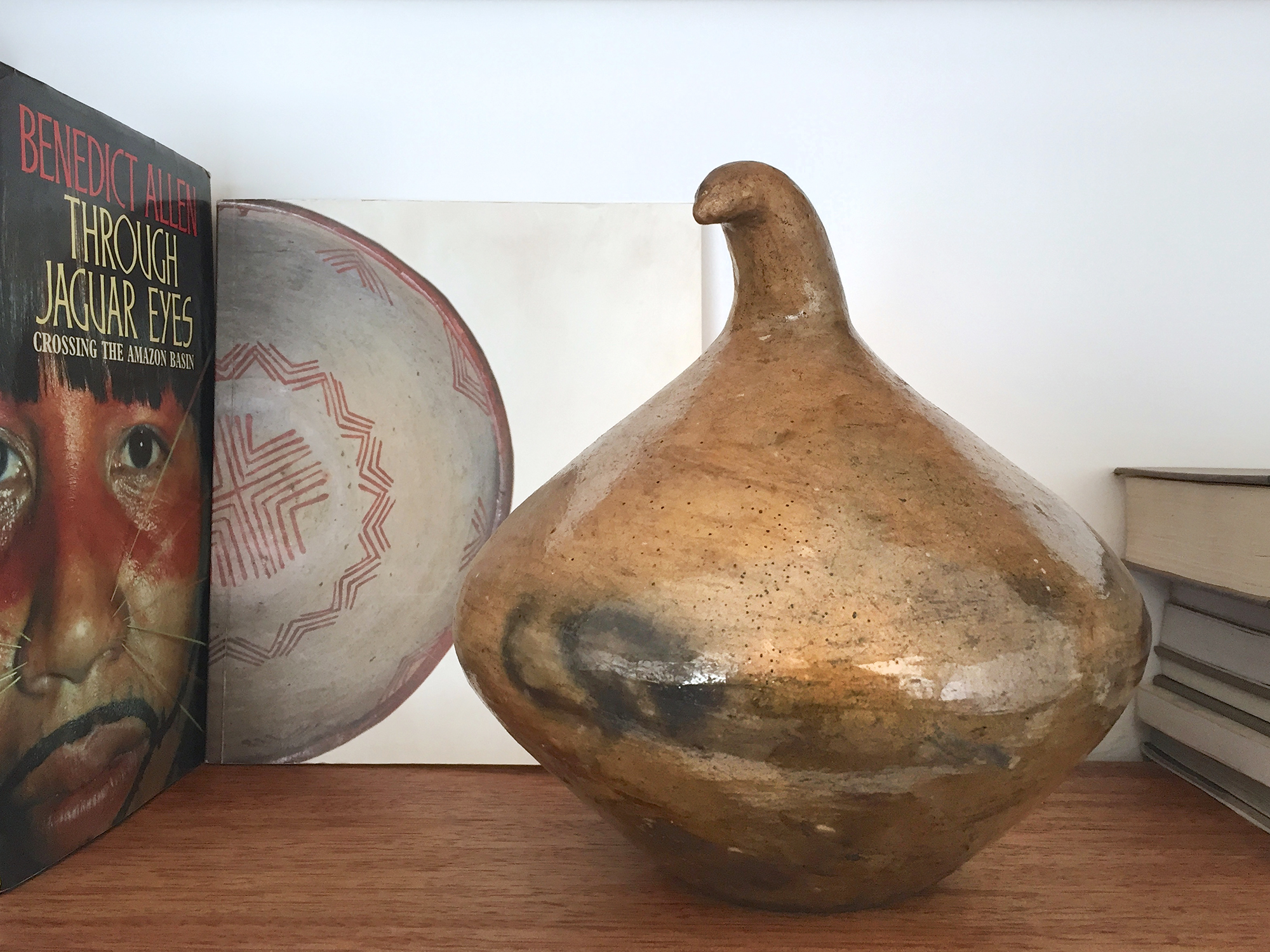